The past Sunday is a significant day worldwide, marking a century since the end of WW1.   Armistice 100 on Orkney is especially significant.

Orkney has a wealth of military history due to it’s strategic importance in the wars. The islands endured many tragedies because of this. Today’s Armistice 100 on Orkney events commemorated those tragic sacrifices. 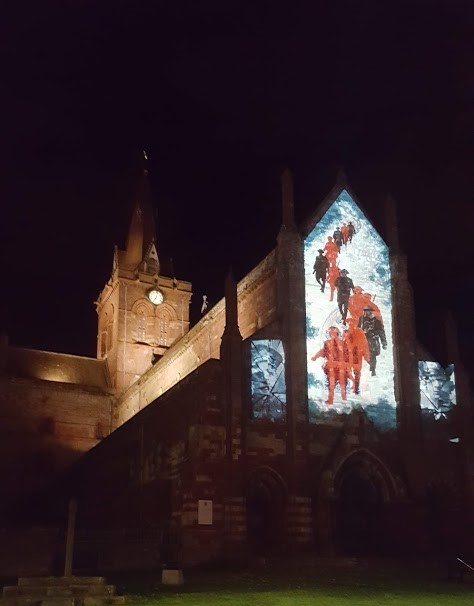 For all of November the St Magnus Kirk came alive with a projected film to honour Armistice 100 on Orkney.  ‘The Great War: an Orkney Memorial Experience’ was a commission from the Kirkwall Townscape Heritage Initiative. Local pupils from Glaitness Primary and Kirkwall Grammar schools were involved in crafting the film with the designers Playdead.

On a blustery Friday evening, I joined the ten or so islanders braving the winds to see this stunning work of art. The beautiful visuals being projected onto the imposing Kirk wall were captivating. From the warships charging through the turbulent waves of Scapa flow to the soldiers marching into the Somme, the images spoke a thousand words.

Watching the scenes play out I realised how ignorant I am of Scotland’s role in the world wars and even more clueless about the importance of Orkney. I resolved myself to remedy this. 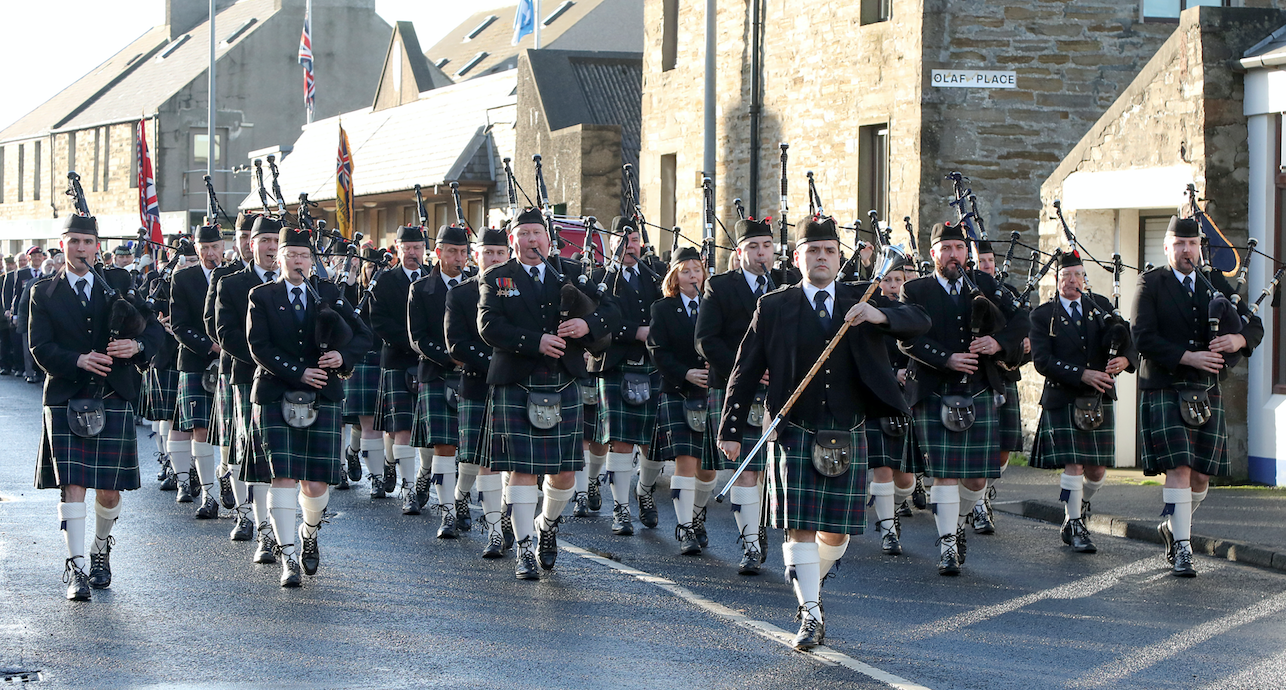 The morning of 11/11 broke with lone piper playing the traditional Scottish lament ‘Battle’s O’er’, the notes of which joined thousands across the globe. The parade began at 10.30 from the Royal Legion, including local cadets, RNLI personnel and pipe band. The town-folk assembled in front of the war memorial and heard an open air service led by Lieutenant John Mitchinson of the Salvation Army. He honoured importance of Armistice 100 on Orkney by recognising the sacrifices of those lost and reinforced the importance of keeping memories alive. The release of doves and laying of wreaths came after. The powerful words and haunting music from the pipe and brass bands were incredibly moving.

Pages of the Sea

The historically significant sands of Scapa beach were the stage for a national art piece “Pages of the Sea”.  Spearheaded by acclaimed director Danny Boyle and renowned poet Carol-Ann Duffy. The art movement commemorates the lives of those lost in the war by sharing their stories and etching their portraits on beaches across the UK. Scapa’s participation was a key part of Armistice 100 on Orkney commemoration. 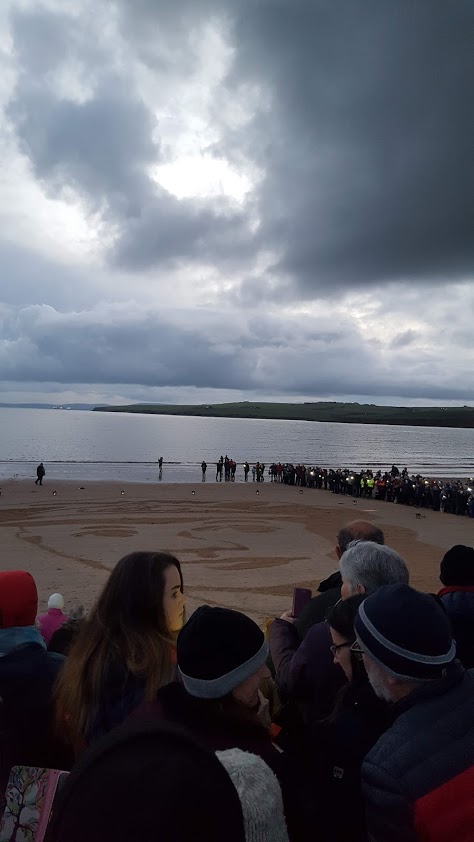 Scapa’s portrait was of Robert William Taylor of Flotta, who enlisted at age 22 and served in the Somme. His tenacity earned him swift promotions until, after two years of service he was Lance Corporal. In 1917, Robert earned the Military Cross as a forward observation officer directing fire during the battle of Passchendaele. Sadly, he died after fatal German Artillery fire at Poelcapelle. Robert now lies in Dozinghem Military Cemetery, Poperinge, Belgium. He is also commemorated on Stromness War Memorial and in Flotta churchyard. His Military Cross can be found in the Orkney Museum.

I arrived at the beach courtesy of dial-a-bus. The sun was low in the sky and the beach was already buzzing with activity. I was handed a copy of Carol Ann Duffy’s poem “The wound in time.” The cutting words heightened the significance of the event. 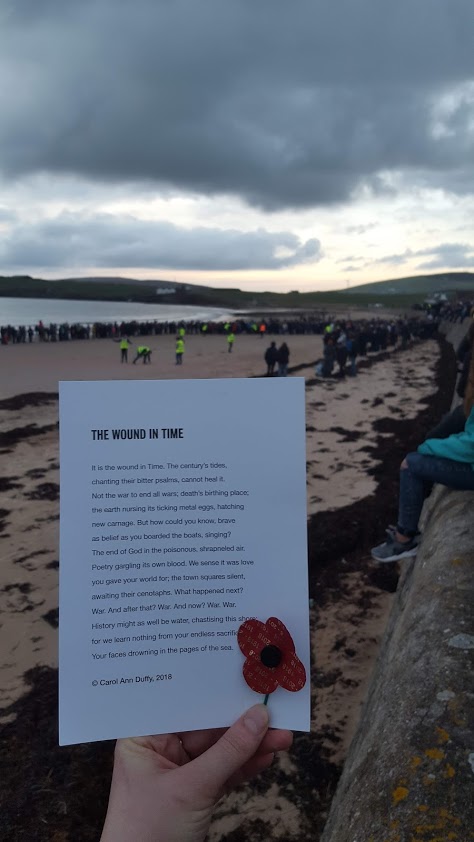 All around, volunteers were busying themselves with raking out stencils of soldier silhouettes. Each one to signify a life lost. The creation of these temporary memorials was open to all and I created one with the assistance of a young cadet. 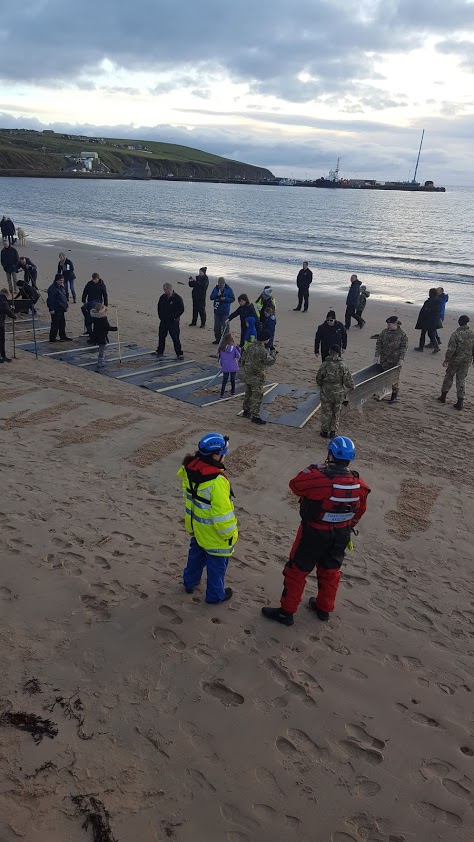 Bagpipes played the final lament as the waves crept up and reclaimed the sand in a reminder of the fleetingness of time. I felt incredibly humbled to have been able to take part in Armistice 100 on Orkney. 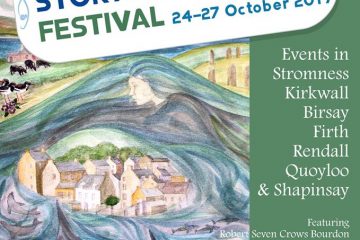 Hail pounded the old church roof as excited onlookers shuffled together on narrow pews. A hush descended as the master of ceremonies began her welcome…. my first Orkney Storytelling Festival event had begun.     What Read more… 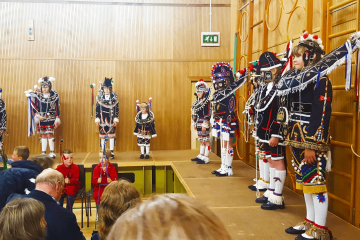 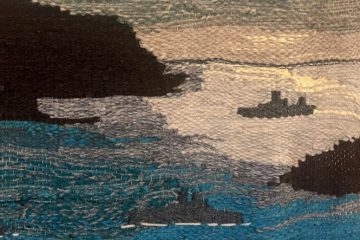 On this day 100 years ago, an event rocked the still waters of Scapa Flow. The story began after the horrors of the first world war. As the allies met to write the Treaty of Read more…